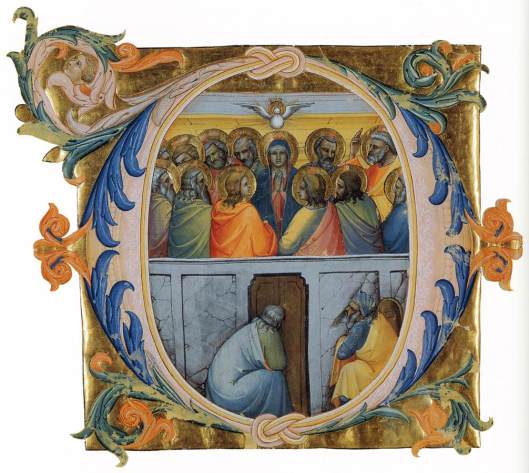 This illuminated letter O by the Camaldolese monk, Lorenzo Monaco (“Lorenzo the Monk”, c. 1370-1425), depicts two parallel passages from today’s Mass readings, the upper half from Acts 2, in which the disciples are all together in one place and tongues of fire come to rest on each one of them, while the lower half evokes John 20:19: “the doors were locked, where the disciples were, for fear of the Jews.” Mary, the Mother of Jesus, is the central figure in the upper room, the only figure with not only a flame, but also the Holy Spirit in the form of a dove above her head, recalling Jesus’ baptism: “This is my beloved Son, in whom I am well pleased.” (Mt. 3:17) Her face is serene, as are those of the two young, beardless men below her, one of whom is surely St. John. The older, bearded men look sleepy. doubtful, anxious, and in the case of the one immediately to Mary’s left, downright suspicious, perhaps representing a range of human responses to the eruptions of the Holy Spirit in our lives.

The two figures in the lower half of the picture might challenge us today to consider whom we may be excluding from our faith communities, because of fear or prejudice based on race, social class or cultural differences. Or, in the context of the current pandemic, the two figures may bring to mind those who feel keenly the closing of church doors.

On this particular Pentecost Sunday, we are struck by the contrast between the fire of the Spirit that unites us in God’s love and the fires being lit throughout our country in reaction to a racially motivated murder. What a difference, what an impact any of us can make, in spreading either good or evil in our world!

Come, Holy Spirit, fill the hearts of your faithful people, and ignite in them the fire of your love, you who have gathered together people of all languages in the unity of faith.